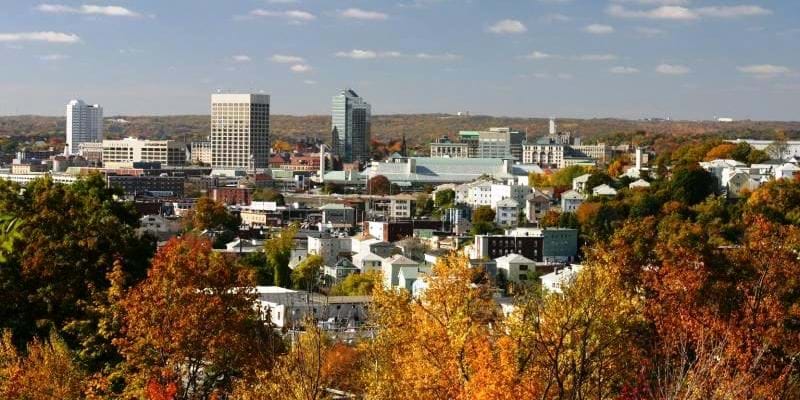 Moving to Worcester, MA? Worcester is a town controlled by the healthcare and education industries, located in central Massachusetts. The town was initially created in 1674 as an English settlement, formerly a center of New England manufacturing. Worcester served as an important place mostly during American Revolution where supplies were processed by the Continental Army, and several factories in Boston moved there to be farther away from the war.

This historically quiet town has become a far-out suburb of Boston in recent years, to the point that, along with both Boston and Providence, RI, the Census Bureau counts economic activity here.

Your average New Englanders could be called Worcester residents: they’re durable, and they wouldn’t mind living in four different seasons. While there are not as many things to do in Worcester as in Boston, for education or to work in healthcare, people move to Worcester. In their fields, Worcester Polytechnic Institute and UMass Medical School are top-notch institutions.

Locals will appreciate the fact that traffic is not as bad here as in Boston, in addition to the ample work opportunities in health and education. When you’re ready to visit Boston, though, you won’t have to drive far. Life in Worcester offers the best in both the big city and a smaller town in several respects.

Worcester, MA, with a population of about 185,000, is the 2nd largest city in New England. A lot of cultural events are available to the public due to the diversity of higher educational institutions in the city. Worcester has managed to revamp its economy for the 21st century, unlike many former manufacturing cities. Worcester’s start-up scene attracts many young entrepreneurs, in addition to the education and healthcare sectors. In general, the quality of life in Worcester is outstanding, which is why so many residents prefer to call home.

The majority of residents in Worcester actually own their homes, and fewer than 36 percent chose to rent. Maybe that’s due to the low vacancy rate for homes, which is around half the national average and continues to keep rental prices high.

The average rental price for a one-bedroom apartment was about $1000 a month in 2020, and a two-bedroom was around $1250. Purchasing a home in Worcester, by comparison, is a decent investment right now. Home prices are growing at a significant rate, and as Boston becomes increasingly pricier, this is expected to continue. Even so, as of July 2020, the average house price is a reasonably manageable at $243,000. Check out the North Side area for those wanting a cheap place to live. The schools are still pretty good, and they’re further from the town center.

Generally speaking, the cost of living in Worcester is marginally higher than the national average of 100, with an index of 109 for Bestplaces.net, but less than the cost of living of 139/100 for Massachusetts. Bestplaces estimates that health care at 84.6/100 is the cheapest basic expense in Worcester, but housing at 121.5/100 is much more costly than normal. Groceries, utilities, transport, and plus various goods are also above average.

A family of four should earn $96,720 to enjoy a modest, but sufficient, standard of living in Worcester, according to the Economic Policy Institute. For equivalent standards of living, single people need around $40,000.

Try for education sector if you want to work in Woschester, MA. In terms of public and private K-12 schools, there are several higher education institutions in Worcester. The Worcester Polytechnic Institute (WPI), one of them, is a renowned technical school focused primarily on science and technology.

There is a heavy manufacturing sector in Worcester, perhaps to complement the presence of WPI, and many notable innovations, such as rocket fuel and typing, come from this area. Polar Beverages, the country’s largest independent bottler, is one of the primary employers. Unsurprisingly, as the University of Massachusetts runs many local hospitals, there’s also a large healthcare industry.

Moving to Worcester, MA? For the moving services you need, WowMover is happy to give you free quotes. It’s quick, it’s fast, and you’ll be happy that you’ve done it.