2023 Guide to Moving to Scottsdale, AZ 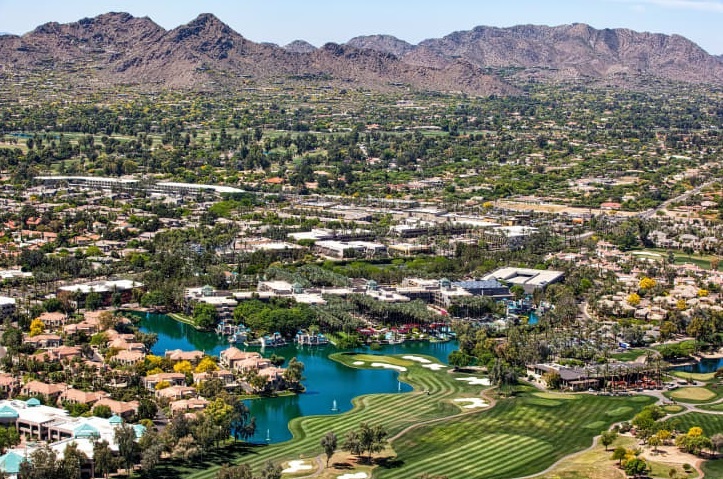 Moving to Scottsdale, AZ: Scottsdale is one of the most beautiful suburbs in Arizona, and if you intend to make Grand Canyon State your home, it’s a perfect place to settle down. Although their city is northeast of the Phoenix metro area, locals refer to Scottsdale as “The West’s Most Western Town”. Scottsdale has maintained much of its western spirit since its establishment in 1894, with plenty of open space, bright desert deserts, and a thriving economy, although most people now drive luxury cars and play golf instead of riding horses for work or wrangling cattle.

Scottsdale, home to more than 230,000 residents, has gained its reputation for low crime, outstanding schools, and relaxing resort lifestyles. The city still has plenty of space for newcomers, despite being wedged between the Phoenix urban sprawl, the Salt River Native American Reservation, and the Tonto National Forest.

To start preparing your move, read through this guide. Then press ‘Get Quote’ to find the skilled movers you need to arrange your transfer to Scottsdale using our service.

Moving to Scottsdale, AZ: Things to know before your move

You may have vacationed at one of the resorts or browsed through the historic downtown district’s shops. Or you may only have seen Scottsdale on the map. No matter what, before you arrive as a resident, you should get to know “The West’s Most Western Town” a little better.

Pros and Cons of Moving to Scottsdale, AZ.

For several reasons, Scottsdale is an ideal city. It has outstanding public facilities, clean highways, and new structures surrounded by natural beauty in the desert.

Cost of Living in Scottsdale, AZ

Once seen as an excellent value, with the boom in home prices, the cost of living in Scottsdale has risen significantly. Compared to the United States average, living in the city is now around 50 percent more costly.

Though much of the cost goes to lodging, you have to budget for transportation as well. There is public transit available, but not sufficiently common to be realistic. You need to really own a car. To run your regular errands, plan to travel longer distances and buy more petrol.

For the city, the median income is $72,000. A family of four moving to Scottsdale should have a minimum of $91,000 in household income. You could be able to get by with just $38,000 if you’re single and willing to share an apartment.

In 2018, the GDP of Arizona ranked fourth in the nation for growth driven by transactions in manufacturing, construction, and real estate. The unemployment rate was just 3.2 percent in early 2019, and sales are on the rise.

Many residents of Scottsdale commute to employment in other sections of the metro area of Phoenix, but locals find work in tourism, hospitality, and retail. Residents and tourists are catered to by country clubs, golf courses, spas, resorts, and hotels and have many opportunities for jobs.

There is also a large healthcare industry in Scottsdale, and its airport supports travel and general aviation employment. General Dynamics is the region’s largest manufacturing and technology business, and healthcare professionals can find employment with the Mayo Clinic.

Moving to Scottsdale, AZ? We offer you the finest, reliable, best interstate moving companies we have handpicked and verified for moving.

More permanent residents rent more than their own houses. Scottsdale has plenty of single-family dwellings available, but more common are condos and townhouses. In the summer, no one wants to water the yard or mow the grass.

Residents must also bid for sales of vacation land. The cost of housing rises as Scottsdale draws more transient residents. The median price of a home is $481,200. A standard two-bedroom flat can be rented for around $1400.

To finance state and local governments, Arizona residents pay a mix of wages, sales, and property taxes. Tax rates are around average relative to other nations. If you’re moving from a high-tax place like California or New York, you might even seem to be saving a little money.

Property Tax:
It depends on your location and the property’s features. A cost of 0.802 percent is paid by the median homeowner, which is lower than the national average. Although the rate is tiny, due to increasingly increasing property prices, plan to write a sizeable check.

Income tax:
The top marginal rate for the progressive income tax system of the state is 4.54 percent, but 4.24 percent is the median rate income earners pay. This tax policy lowers pressure on top earners, which increases economic growth by bringing in more affluent citizens and business owners.

Sales Tax:
The state’s sales tax is 5.6 percent, but extra sales taxes are levied by Maricopa County and the City of Scottsdale each. For transactions made within the city, plan to pay a combined 8.05 percent tax.

Scottsdale has a humid, arid climate, much like the rest of the Phoenix region. Residents enjoy 299 days of sun on average and only experience about 10 inches of rainfall annually. The essentials everybody keeps handy are sunblock, extra water, and big floppy cowboy hats.

In June 1990, summer temperatures famously hit 122 degrees Fahrenheit. Summer temperatures, more commonly, only peak at around 105 degrees. The heat stays constant and in the evenings it becomes much more bearable. The good news is that the sun is dry, so you’re not going to have to face intimidating moisture.

The daytime temperatures could hover in the 70-degree range during the winter, but at night it gets cold. Lows fall into the 40s, and on rare occasions, freezing temps of 19 degrees do occur. Snow in Scottsdale, however, is uncommon, although residents in February 2019 were shocked by snow flurries.

In the form of rain and hailstones, as stormy clouds form overhead, people witness dramatic lighting, thunder, and torrential downpours. Lighting strikes spark dry brush, causing fires, and rain is little absorbed by the parched earth, leading to flash flooding threats. Wind storms, especially for drivers, can be a serious danger. When the weather approaches, keep an ear on your weather app.

What to do when moving to Scottsdale, AZ

It is impossible to remain indoors with so many days of sunny weather. Scottsdale has plenty of opportunities for outdoor activities to attract you out into the open. Pinnacle Peak Park is a 3.5-mile round trip hiking trail with common spots for rock climbing. The McDowell Soren Reserve is a region of nature with hiking or horseback riding trails.

Also, you should learn to play golf. It is the Scottsdale thing to do. It’s virtually impossible to skip the sport, with over 200 courses nearby. Before trying out your skills at the more difficult courses where the pros play, take lessons or train at the smaller local clubs.

The map is littered with shopping centers, beaches, and malls. Every major retail chain represented can be found and niche boutique shops are mixed in for good measure. Scottsdale’s Old Town has the best nightlife and restaurants in town, and it is also a popular tourist destination.

There are many unique museums and attractions in Scottsdale that carry tourists into town. The Phoenix Zoo is just to the southeast and the north is host to the OdySea Aquarium and Butterfly Exhibit. The Western Museum in Scottsdale, the Railroad Park, and the Musical Instruments Museum cater to the curious.

Arizona has many professional teams if you’re a sports fan, but you’ll have to leave Scottsdale to see any of them. The Diamondbacks and Rockies of Major League Baseball are also remaining in Scottsdale for spring training. The Arizona Rattlers, an indoor football team, are playing in Mesa, only a few miles north.